Matt from EVANNEX welcomes us to Ft. Lauderdale

The car is simply phenomenal! We love the autosteer and traffic aware cruise control feature, used it probably 85% of the time. Awesome! Made driving all that distance so much more relaxing and enjoyable! Those two features were responsible for the fact that the dreaded crossing of the US plains became the best ride ever. On top of that, the comfy seats not only made sure we never felt it was time to stretch our legs, they were also the reason that I felt better after a day’s drive than after a night’s sleep. Honestly! 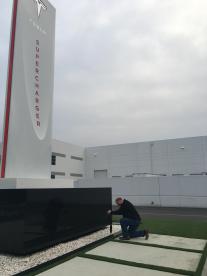 Thanking for a bright future… 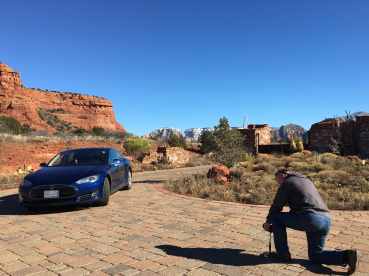 The US-wide system of Tesla SuperChargers was an amazingly reliable tool. Never did we fear we would run out of juice. The next SuperCharger was always within reach. Know why they are called SuperChargers? Because you can top up the Tesla’s batteries at the mind-blowing speed of up to 360 miles/hour. How you do it? You just stop at a SuperCharger along your way, enjoy a coffee, a (dog)walk, lunch or a personal pit stop in one of the conveniently located malls or restaurants, top up your batteries and continue on to the next one. During the whole trip, the car was always ready before we were. It beat us to it every time. By the way, your Tesla App let’s you know when you’re ready to continue your trip by sending a message to your phone. How nice is that?!

Eagerly awaiting the start of the Factory Tour

Rolf got his wish: Seeing a Model X at the factory

There is no need to fill the batteries to capacity, 80% is recommended – unless the car tells you that you need more. That only happened once during the whole trip, between Baton Rouge, LA and Mobile, AL, where we charged to 98% during lunch hour. In 2016, many more SuperChargers will be built so that there will be fewer and fewer of those longer distances between charging and more and more routes will become available. More freedom at no cost to the Tesla owner! Imagine that: We.Did.Not.Pay.A.Single.Cent to get from Victoria BC all the way to Ft. Lauderdale FL! Long distance travel SuperCharging is free-of-charge. 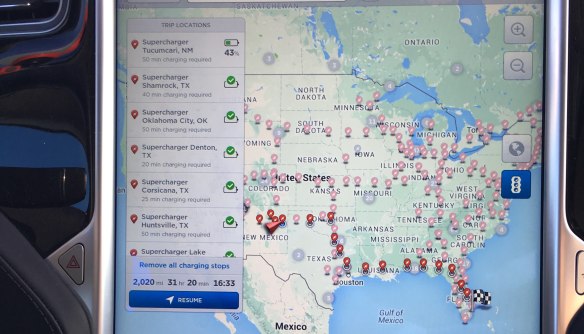 The one challenge we had initially was to find pet-friendly hotels close to the SuperChargers, since not all hotel chains are happy to welcome four-legged family members. We were of the erroneous belief that we would have to charge the car over night. So, at the beginning, we were going back and forth between Charging Apps and Hotel Apps as the Charging Apps don’t tell you which hotels are pet-friendly, and the Hotel Apps don’t tell you which hotels have EV chargers. (Yet! I hope that’ll change! I sure sent some emails…) Initially, this made finding a room pretty frustrating. Later, we didn’t care about the ‘charging over night’ part any more. We realized, it’s not necessary! We charged at the last SuperCharger before a LaQuinta hotel, a pet-friendly chain, had dinner while the car charged, then checked into the hotel. Thank you, LaQuinta, for being so reliable in welcoming my four-legged baby boy!

Recharging in more ways than one

We enjoyed some not so usual encounters along the way: We saw ICE (Internal Combustion Engine) car drivers taking pictures of Teslas at the SuperChargers. We were asked at a red traffice light whether our car was one of those self-driving cars (Sorry, no, not yet, but close enough for us.) We got numerous thumbs-up from ICE car drivers passing us. We were even thanked to have made it all the way to Mobile, AL by the driver behind us while waiting at a red traffic light. Yes, he jumped out, ran to our side window, had us roll it down and thanked us.

We met so many amazing Tesla people! There was Linda, who already knew about us from the Tesla Owners Worldwide group on Facebook. Ann, Forest and Dave, who we envy, because they actually got a chance to visit SpaceX. Seth & Nancy, the most enthusiastic non-Tesla owners we’ve met so far. Klaus, who followed us in his Signature Model S to the next SuperCharger just to chat with us for an hour. Roger, Matt and Mike, from EVANNEX, a family geographically brought back together to start a Tesla related business. The overall message: Tesla owners just LOVE their Teslas!

We hope you enjoyed the ride with us! We’ll be going back to Victoria BC mid-April. This time driving a little less than 4,800mi/7,800km as we will take a more direct route home. BUT… that’s nothing compared to what we’re planning for the summer! Starting June 1, 2016, Rolf, Kye and I will be crossing Canada in our then brand-new, signature-red Tesla Model X. This past trip was only a prep run. The cross-Canada trip in the summer will be the real thing. It’ll be more of a challenge since there are no SuperChargers (yet) between Red Deer, AB, and the Great Lakes or East of the Great Lakes. We will take way more time for the crossing, probably around 3 months, as we want to enjoy and show you our beautiful country. We will be shooting videos, taking pictures and write about our experience – all as part of our self-imposed mission to promote sustainable energy through long-range travel in an electric car. Drive with us vicariously, meet us along the way for a chat, support us in promoting sustainable energy, share our posts, let us know your questions, I’m sure we’ll all have a blast. So stay tuned!

Silke with Rolf and Kye

Thank you from both of us! And Kye 😉