In this video, we travel from Jasper to Lake Louise; a 231km trip without any chance of charging. We travel the stunning Icefield Parkway through the National Parks of Jasper and Banff, climb over two 2000m+ passes and even have some fun with gas pump attendants.

Like Loading...
For me, this past week had three highlights: First of all, we drove through one of the most spectacular areas on earth, Jasper and Banff National Parks! I could spend weeks here, enjoying the view, the fresh air, the wilderness of it all. We so much enjoyed our hike near Jasper along the ‘Valley of the Five Lakes’ Trail (Thanks, Zoe, for the recommendation!). The lakes were a stunning turquoise colour which would’ve been even more breathtaking had it been sunny.

One of the ‘Five Lakes’ in Jasper

Our next hike was at Lake Louise to the ‘Plain of the Six Glaciers Teahouse‘ (Thanks, Victor, for this great recommendation!). That one almost did us in ;-).

END_OF_DOCUMENT_TOKEN_TO_BE_REPLACED

You can either meet us ‘On the Go’ or at ‘Upcoming Events’. ‘On the Go’ means, we can only share our general whereabouts and you would have to contact us if you are in the area and wish to meet us. The next two ‘Upcoming Events’ are two car shows, please see details below the image.

We will regularly publish our travel plans on our Facebook page. Whenever we can, we also post a link to Glympse on Facebook (FB), which will show you our location in real-time. (That only works if we have cell phone coverage, of course.) You can also subscribe to the events on our Facebook page (left column under photos and videos) to be notified automatically when we post new events there.

Hope to see you soon!

In this video, we travel from Clearwater to Valemount and try new strategies to be more energy efficient. We stay for 3 days at Canoe River Campground in Northern BC. Kye meets a bear and a cougar…;-)

In this video, we travel from Kamloops to Clearwater establishing the average energy consumption at 80 km/h. At the campground, we deal with our first charging challenge, before we set off hiking to three waterfalls in Wells Gray Park. Finally, we discuss our options for the upcoming ‘nail-biter’ trip from Jasper to Lake Louise.

Victoria BC to Valemount BC

What a week! My life has rarely been this chaotic. After a marvelous Send-Off from Mile Zero including two TV interviews (Thank you, CTV and CHEK!) and a beautifully quiet electric car convoy to the ferry, we spent some time with family in Vancouver BC. I had ‘reserved’ two days just in case the Vancouver media would be interested in our 100% electric adventure as well, but it wasn’t so; maybe a good thing, since Rolf and I were really sick with a cold. Regardless, we went to the Tesla Social on Sunday and also showed our car in Panorama Park, Deep Cove/North Vancouver the same day. Thank you, Bruce, for joining us with your Model S for this impromptu Vancouver EV Association Show & Tell! 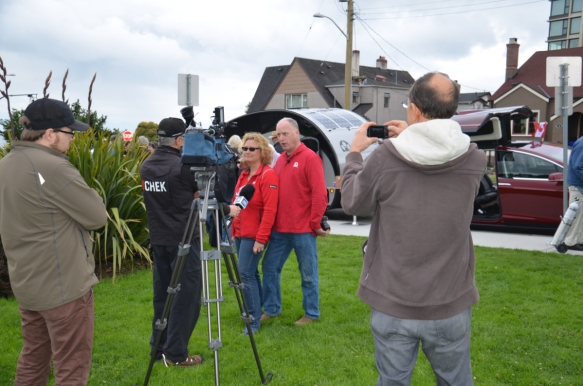 Rolf’s and my first ever TV interview during Send-Off at Mile Zero, Victoria BC

On Wednesday, we drove to Chilliwack to stay with friends from Rolf’s model glider days. Arend was world champion in F3J glider competition two times and Rolf managed a bronze medal for Canada with Arend’s help a few years back. That evening, Arend enjoyed flying our drone instead. Our visit led to a very interesting talk with Arend’s friend and neighbour, who uses a windmill to power his airtools. Rolf took a video, so I won’t go much into it. Now Rolf just needs to find the time for the video editing, but he’s busy with our ‘Clearwater weekend’, so who knows when he gets to it. Time is something we didn’t have much this first week. We’re already way behind with documenting… You can either be social in person or social online, but we haven’t found a way to combine the two yet. It’s all pretty new to us! Did I mention chaotic?! 😉

After Chilliwack, we enjoyed an evening with Andy, Jody, David, Jamie and little Duncan in Kamloops, before another Meet-up at the Kamloops Supercharger the next morning, for which CBC joint us for an interview, and continuing on to Clearwater. (Thank you, CBC!)

END_OF_DOCUMENT_TOKEN_TO_BE_REPLACED

Last Saturday, June 11, we left Victoria BC for our 3 months trip across Canada in our Tesla Model X towing a camping trailer. With this trip, we want to promote sustainable energy and transportation. What a wonderful Send-off we had! So many friends and electric car enthusiasts made the trip to Mile Zero for some last farewells. Watch us leave with an electric car convoy to the ferry.

Thank you, everybody, you made our departure really special!

PS: Thumbnail function in YouTube seems to be broken. We didn’t select this one! 😉

We Tesla drivers are so spoiled! 😉 Not only do our cars have a range of around 400km on a single, full charge, Tesla Motors is also setting up a fast-charger network for us, the so called ‘Superchargers’, which let you charge at a speed of up to 600km/hr. This means that most times you’re topping up your charge, you don’t have enough time to finish your coffee before the car is ready to go. We enjoyed both of these aspects of driving an electric car immensely on our 15,000km round trip from Victoria BC to Florida and back. It made that trip fun and super-easy.

What a rude awakening we suffered on our test-run last week, going up North on Vancouver Island! Both of those ‘luxury items’ were suddenly taken away from us. Why? Because we we were towing a camping trailer with our Tesla Model X the 265km from Victoria BC to Campbell River and back. How? Because towing a camping trailer pretty much cuts our range down by 50%; and because Vancouver Island doesn’t have any Superchargers (yet).

So, this is what happened: END_OF_DOCUMENT_TOKEN_TO_BE_REPLACED

CTV and CHEK footage of our Send-off yesterday are online!

Thank you, CTV and CHEK, for sharing our story!

We would like to let everybody know that event updates, such as yesterday’s Send-off or today’s Show&Tell in North Vancouver, will be posted and updated on our Facebook page. Please follow us on Facebook if you are interested in meeting us. By signing up for events there, you can make sure to not miss any changes. Although we try to keep changes to a minimum (actually, we try to avoid them!) and certainly try to not make any changes last minute, we know it’ll happen. So for the latest update (and our photo albums!) please refer to our Facebook page.