Please find below some of the questions we get asked repeatedly – as well as our answers. If you have any other questions, please do not hesitate to let us know. You will find a contact form at the bottom of this post.

Where are you going next?

Our trip is done! After 3 months and 15,000km, we arrived in St. John’s beginning of September.

After our cross Canada trip, we did the New England states for the Indian Summer and then continued on to Florida.

End of March 2017, we will return home from Florida, via California.

What kind of car are you driving?

We’re driving a Tesla Model X, which is 100% electric. It’s an SUV cross-over and it is not a Hybrid. The car is built by Tesla in Fremont, California.

Our specific Tesla Model X is a 90D, which means it has a 90kWh Lithium battery (located in the floor between the wheels) and a dual motor (one between front wheels and one between back wheels, which makes it a four-wheel-drive). We opted for the 6 seater version, but it comes also as a 4,5 or 7 seater. Our car’s colour is Signature Red. 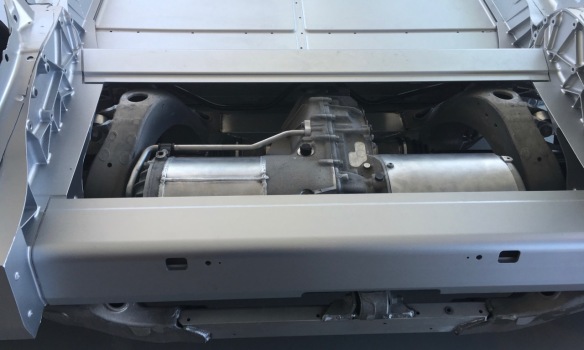 Other Models: Tesla Roadster (discontinued), Tesla Model S (Sedan). Coming in 2017: Tesla Model 3 (compact Sedan) at base price USD35,000 before incentives. Tesla is also in the early stages of developing a Tesla Pick-up and a Tesla Semi-truck.

We, TeslaXCanada, are not affiliated with or endorsed by Tesla Motors. We simply like the car and believe that electric cars and solar charging are necessary steps for a sustainable future.

How far can you go? What’s the range of your car? What’s your car’s consumption?

That always depends on how fast you go. The faster, the shorter the range. The range also depends on wind, weather, outside temperature and road conditions.

Without the trailer, the Tesla Model X 90D can go up to just over 400km on a full charge at highway speeds and air-conditioning on. With the trailer, our experience has been as follows:

Here are some more numbers regarding the towing range, so all numbers are WITH the trailer. Our trailer the way we have it probably weighs 2200lbs. – Numbers shows are during heavy rain and with 20-40km/h headwind (conditions not consistent!):

One of our reasons to go for the R1723 was the teardrop shape and light weight. We’ve since seen numbers by other people that have us puzzled: trailers that were less air streamed and much heavier seem to have an even better ‘energy consumption’ rate than us. We’re not sure why that is. You will find more information on towing consumption in this thread by Tesla Motors Club.

Please check out our blogpost on this topic.

Is having to charge an electric car inconvenient?

No, it is actually more convenient than filling up at a gas station. You come home, park your car in your garage and plug it in. Next morning, your car is charged. So convenient!

A few things you need for that:

It’s only during long-range travel that you have to rely on chargers other than your own. There are numerous Apps that help you find the next charger, such as PlugShare, SunCountryHighway and Teslarati.

Tesla also provides their own in-car-navigation that let’s you route to your destination via the Tesla Supercharger network. This network covers most of the US, but in 2016 only the South-West of Canada and the area around Toronto ON.

Charging speed depending on charger type:

What kind of batteries does the Tesla have?

The Tesla has over 7,000 small lithium battery cells that are thermally managed, which means  that the batteries sit in a liquid that is warmed or cooled as required. The battery pack is warranted for 8 years and unlimited miles. Rolf expects his car’s battery to be usable up to 500,000km.

Once the lithium batteries will be unfit for further use, they will be recycled since they contain material that is so valuable that it makes sense to reuse it.

What is the Tesla Referral Program?

If you plan to purchase a Model S or X, which you would do online, you can safe USD1,000 if you use the referral link or code of a person who already owns a Model S or X. The Tesla Referral Program has an expiry date, but has been re-established several times already. The owner providing the link receives an incentive as well, which changes every time the program is re-established. Click here for Rolf’s Referral Code.

How do electric cars do in winter conditions?

In the winter, electric cars will experience a reduced range due to the additional energy being used to warm the batteries and the interior of the car. BUT:

Are electric cars truly better for the environment than gasoline cars?

Yes. The Union of Concerned Scientists has published a cradle to grave analysis that shows that electric cars are cleaner than gasoline cars even when powered from the dirtiest grid (coal).  Higher emissions during electric car production is quickly offset by reduced emission during usage. And, if you put solar on the roof of your house, you can drive entirely on sun shine. Our solar system makes enough energy to drive our Teslas 60,000km (1.5-times around the world) every year.

What kind of camping trailer are you pulling?

We decided to buy an Alto R 1723 because it is teardrop shaped and lightweight. The  advantage of the Alto R 1723 is also the retractable roof, which reduces the drag when towing. The Alto is built in Quebec by Safari Condo. It weighs 1,715lbs unloaded and we think that our configuration including our ‘stuff’ weighs about 2,000lbs.

What kind of solar panels did Rolf install on the roof of the trailer?

The Alto R 1723 can be ordered with solar panels of 200W total. Rolf wanted more power and installed 8 semi-flexible 100W panels, about CAD220/panel via www.solarwholesaler.ca. You’ll find more info about the solar panels in our Blog post ‘Solar Charging for Nerds’.

What kind of batteries does the trailer have?

The solar panels charge 400Ah Lithium Iron Phosphate Winston Cell Batteries at 13V. Rolf placed them in a custom-made box and installed a homemade battery management system. In a pinch, we could charge the Model X from those batteries at a speed of 6km/h up to 18km total. With a larger converter, we could double that speed. 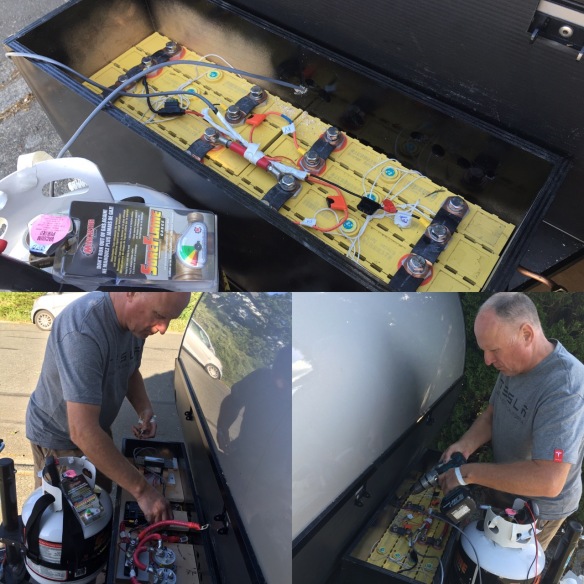 If you have any other questions, please let us know: