’Twas the night before Christmas and all through Victoria, not an engine was stirring… – At least that was true for the convoy of six Electric Vehicles from our Victoria EV Club (VEVC) that participated in Saturday’s Santa Light Parade. 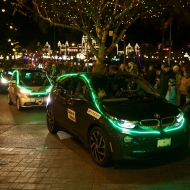 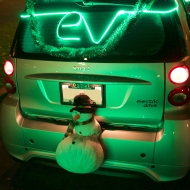 One among six different EV makes

So many kids were cheering us on
In its 34th year, the light parade was bigger and more exciting than ever. With over 80 entries, it can now claim to be the biggest light parade in Canada, even leaving Vancouver and Toronto in its wake. An estimated 40,000 spectators cheered along Government Street despite the cold. It was viewed by thousands more in the comfort of their homes – all the way to the Northwest Territories, we know that for sure!

Thanks to Mitsubishi Motors, who graciously granted the club a loaner for the parade, we were able to showcase 6 of the 8 makes of electric vehicles available in Canada, thus making best use of the 6 slots we were allotted. In sequence of appearing: a Tesla Model S, a Mitsubishi, an i-MiEV, a BMW i3, an eSmart, a Nissan Leaf and a Kia Soul.

The parade hadn’t even started yet when we probably got the best compliment of the night: a lady came up to my car’s window and thanked us for participating. She said it couldn’t come at a better time, referring to the climate change conference in Paris. In parting she congratulated us on being, in her opinion, the best entry of the parade.

The idea to participate in the Santa Light Parade was born after our last car show at the Ribfest in Esquimalt. After numerous such shows all during summer, we didn’t feel like going into hibernation until the Royals Game in March 2016 (stay tuned for more Royals information!). Did we expect it to be fun? Sure! Did we think it would be that much fun? No way! It turned out to be a great time for the whole family: In my car, the ages of the EV enthusiasts ranged from 9 to 88 years!

Many comments we overheard from the spectators showed a widespread awareness of and interest in Electric Vehicles. We also overheard comments like “What is an EV Club?” Fellow spectators were quick to explain, but I think we have our work cut out for us, promoting 100% electric cars and solar energy. I certainly hope we planted some seeds. Wouldn’t it be awesome to see more electric cars and solar panels around Victoria! Or in Canada for that matter… 😉

If you want to get more involved in the activities of ViEVC, join us for one of our coffee meetings, every Monday at Tim Horton’s on 3954 Shelbourne Street, just north of the University Heights shopping centre, between 9 and 10 am.

Last but not least, a big “Thank you” goes to the members and guests of VEVC

by Silke Sommerfeld for the Victoria EV Club