What a week! I don’t know what to do first: Proofread Rolf’s blog post on solar charging, putting the parade pictures together for a Facebook Album, write the Victoria Parade blog post, work on the parade’s video, or what?! 😉 Media Kit is waiting, car stickers need ordering, Canadian EV Clubs need to be contacted, and so much more… As per today, we have 15 days left before our cross Canada trip in a Tesla Model X towing a camping trailer will begin! Well, one thing at a time 🙂 Time for the parade’s blog post then! 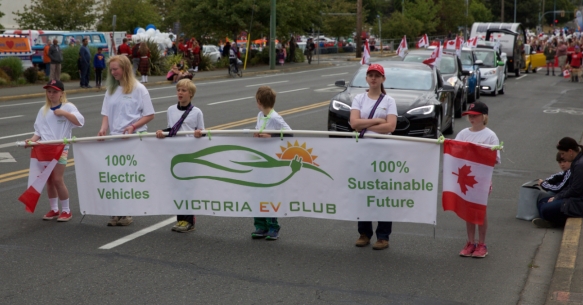 All lined up and ready to go: 100% Electric Vehicles for a Sustainable Future

Monday, June 23, was Victoria Day and as usual, Victoria BC celebrates the Queen’s birthday with a parade – the 3rd largest in all of Canada and the 118th in Victoria BC! Fellow Victoria EV Club board members agreed that this would be a great opportunity to raise awareness for electric cars in general and our cross Canada trip in particular (Since we heard a few too many “What’s an EV?” during the 2015 Christmas Parade… 😉 ) Therefore, we signed up early on. Luckily! Since “only” about 113 entries made it into the parade with another 24 on the waiting list. No wonder, since this annual parade usually attracts crowds of close to 100,000 people with even more following via TV live Broadcast and, for the very first time this year, also via Internet online live streaming. That way, even my sister in Germany was able to watch us!

Rolf, Lynda, Christina and me. All smiles! 🙂

The day started out for us at 7:00 am, when we were scheduled to arrive at the marshalling area on Finlayson Street. Already, the first spectators were lined up for the 9am start of the parade! As entry B27, we knew we had a little bit of a wait, but time just flew by. Actually, it never stopped flying… This must have been the “shortest” 3km walk I ever did! Both sides of Douglas Street were packed with people, many of them clapping enthusiastically when we came by and cheering for us and the Queen. It was over so fast, we didn’t even get a chance to have a sip of water. But hey, we had tons of fun! Fortunately, we had Arno as photographer and Andrew to take videos, or we might have missed the opportunity to record those priceless moments!

Rolf and I were particularly lucky, and are still immensely grateful, that we found Ed from Washington state, who was willing to pull our trailer in the parade with his Model X. We’re close to having ours delivered, but it wouldn’t have made it here for the parade. A big, big THANK YOU to you, Ed! Seeing your Model X with its falcon wing doors open tow our trailer in the parade was an amazing sight! The crowds loved it!

You can still watch the complete parade at ChekNews Island Farms Victoria Day Parade, but be quick, it might be taken offline any time! You can watch our particular group between 1 hr and 1:02 hr into the live stream. Admire Queen Victoria, aka Doreen, and Ed’s performance as the queen’s driver; enjoy how quiet our group is going by, see our lead car, a Tesla Model S, followed by a Nissan Leaf, Kia Soul, eSmart, BMW i3, Tesla Model X, and another eSmart; watch my ‘100% electric’ friend Lynda, see how Kye is ‘walking me’ and how my friend Christina is in much better control of her dog Bentley. 😉 And, of course, enjoy a great view of Ed’s beautiful Tesla Model X towing our Safari Condo camping trailer!

Okay, that’s it, gotta start the next thing now, working on the Parade’s video, which I will upload in a few days. Stay tuned! In the meantime, check out more photos on our Facebook page under Photo Album! 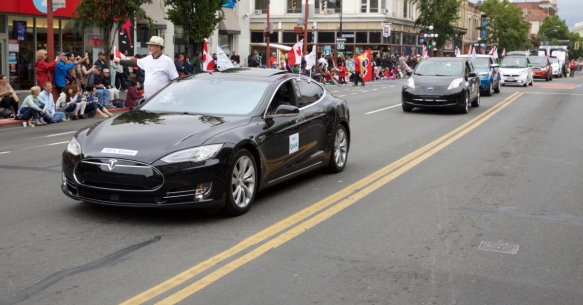 A Tesla Model S as our lead car together with Fred, the EV Club’s president